Bud Cadell created a neat Venn diagram several years ago. Interestingly, the first image I saw which linked to his original post, was not the same as the image now visible on his post. I’ll show both here as I think they both have unique aspects. – the first is more about “career planning” whereas the second has a direct business focus. 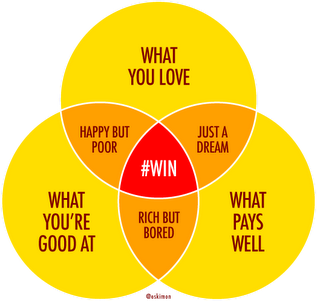 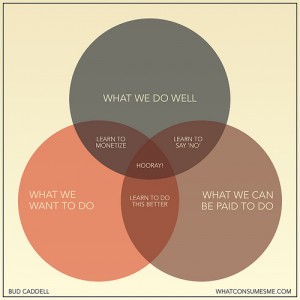 The Exception by Eddie Reader. The second verse:

Of course, The Beatles sang about this long ago in “Can’t Buy Me Love” (1964) on their A Hard Day’s Night album.

It’s kinda obvious, and of course relates to happiness in general as much as love specifically, but we often forget and chase money with a ridiculous number of working hours. Consequently you’ll miss out on a life now, and not only be stuck later with the monster you built, but possibly also lose things in your life that you really care about.

I’ve had people tell me “oh I’ll just work 80+ hours a week this year, so I can take it easy from next year.” – I’m still waiting for any of them to accept my bet that in twelve months they’ll still be working 80+ hours, if not more – they already know they’re really deluding themselves!

What they’re doing is building business processes that presume that they’re working those hours and occupying various critical spots in operations, and that’s one aspect of the monster I referred to above. You get what you build, so if you want it different, build it differently.

By the way, do you know how children spell love? T I M E.