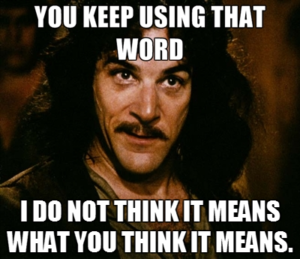 “Innovative”, a term frequently used by companies to describe themselves and their products.

To me, it means they’re just using some buzzword – it has no real meaning in that context, but it does manage to give me an instant negative impression of the company that uses it.

Similarly, a person or company declaring themselves as “cool” is by definition uncool.  Others can say you’re cool, but saying you’re cool yourself is a definitely no-no.

On a related note, have you noticed that any country that has the word “Democratic” in its name actually isn’t [democratic] ?

Pacific Standard magazine tracked down the origin of the “trickle down economics” concept popularised by Ronald Reagan in the 1980s and curiously (consistency principle?) still supported by many.

Apparently, the phrase was actually coined by American humorist Will Rogers, who (80 years ago now) mocked President Herbert Hoover’s Depression-era recovery efforts, saying that “money was all appropriated for the top in the hopes it would trickle down to the needy.”

A new report from the International Monetary Fund has declared the idea of “trickle-down” economics to be as much a joke as Rogers imagined.

“Income distribution matters for growth,” the economist authors of the IMF report write. “Specifically, if the income share of the top 20 percent increases, then GDP growth actually declined over the medium term, suggesting that the benefits do not trickle down.”

The study results suggest that raising incomes for the poor and middle class yields measurable improvements to the national economy.

So why aren’t (more) countries taking this approach? Sounds to me like typical political short-sightedness. It’s clear that in the long run, everybody is better off (and that includes the wealthy), while with “trickle down” nonsense the longer term outlook for the wealthy is not that good. Unsurprising, really. The heirs of the wealthy might want to consider this, as it’s their future.

In the beginning, there was a Plan.

And darkness was on the face of the Workers.
And they spoke among themselves, saying
“It is a crock of shit, and it stinks.”

And the Workers went unto their Supervisors and said
“It is a pale of dung, and none may abide the odor thereof.”

And the Supervisors went unto their Managers, saying
“It is a container of excrement, and it is very strong, such that none can abide by it.”

And the Managers went unto their Directors saying
“It is a vessel of fertiliser, and none may abide its strength.”

And the Directors spoke among themselves, saying one to another
“It contains that which aids plant growth, and it is very strong.”

And the Directors went unto the Vice Presidents, saying unto them
“It promotes growth, and it is very powerful.”

And the Vice Presidents went unto President saying unto him
“This new Plan will actively promote growth and vigour of this company, with powerful effects.”

And the President looked upon the Plan, and said that it was good.
And the Plan became Policy.

And this, my friends, is how shit happens.